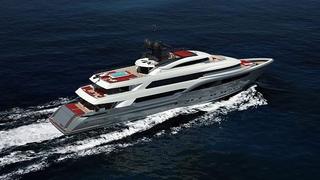 Palumbo has already announced its future construction plans with the upgrade of its facility in Naples, but now those plans are coming to fruition. Palumbo has officially started the construction of the Columbus 65m superyacht two days ago.

The new Columbus yacht, currently known as hull number C04, is the third of the custom Classic collection. Built in steel and aluminium, she has a naval architecture and an exterior styling by Sergio Cutolo’s studio Hydro Tec.

Her large interior volume (1,850 GT) will accommodate 12 guests in six cabins. The master suite will be on a dedicated upper deck. Accommodation will also include a full-beam VIP, four double staterooms, and quarters for 18 crew.

The Columbus C04 is powered by twin engines giving a top speed of 16.5 knots, a cruising speed of 15.5 knots and a range of 5,000 nautical miles at 13 knots. ILO compliant, the yacht will also include eco-friendly solutions.

Special features will include a large beach club with spa, a cinema, a helipad and an elevator servicing all decks.

When launched, the Columbus C04 will be come the flagship of the yard. Her delivery is scheduled in 2015.