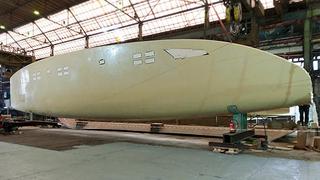 In May 2011, we reported the order of a Sunreef 82 DD (DD standing for double deck). Today, the Polish yard has sent us an update on the build, with pictures of the hull and exclusive renderings of the future interior.

The Sunreef 82 DD was entirely designed by the Sunreef's in-house teams. Her double decks allow space for an owners' suite on the main deck, a large, bright saloon and a raised pilot house. The interior will accommodate seven guests in three cabins: a master suite on the main deck with spa pool and gymnasium, a double cabin and a twin with a Pullman.

The construction is well advanced, with a hull finished and mechanical installation due to begin. The installation of the flybridge will be completed by mid April. The mast will measure 34 metres, and the yacht will be powered by twin 355hp engines giving a top speed of 12 knots.

The Sunreef 82 DD is scheduled for a July launch and she will make her debut at the Festival de la Plaisance in Cannes this September.