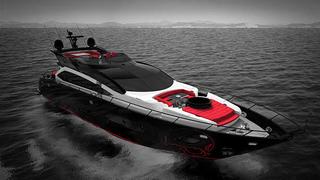 In June 2013 we reported that the first Sunseeker 101 Sport Yacht hull had been removed from her mould at the Sunseeker yard. Now, four months down the line, interior work is well underway and the 101 Sport Yacht, sold by Harry Bristow-Holmes at Sunseeker London, is taking shape.

The engine fit-out has been completed and all lower deck glazing is in place, including the trademark Sunseeker panoramic hull windows. The launch of the Sunseeker 101 Sport Yacht is scheduled for early February 2014, allowing for eight weeks of testing in Poole harbour prior to her delivery in time for the Monaco Grand Prix.

Harry comments: 'The full specification has been completed by her owner, with final amendments now being confirmed. Boasting over 280 modifications to the standard factory specification, this particular 101 Sport Yacht is certainly going to be very special. It won't be long until a legend is born.'