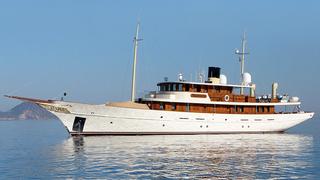 Burgess tell me that they have been appointed as Central Agents for the 47.6m motor yacht Vajoliroja, built by Proteksan Turquoise in 2001.

Vajoliroja is a 1930s-inspired modern take on a classic vessel. Interior design is by LM Pagano, who took original Honduran mahogany panelling and blended it with custom-built Art Deco-influenced furnishings, vintage fabrics, and vintage accessories. Providing all the amenities of a modern vessel without losing her old-world charm, Vajoliroja cleverly intermingles the old with the new providing for high quality entertainment with state-of-the-art electronic equipment blended in with the décor throughout the yacht.

Vajoliroja sleeps 10 in five staterooms. The master stateroom faces forward on the main deck with remarkable views through 180 degrees. The four guest suites are located on the lower deck and include one VIP, one double, one twin, and one bunk cabin with upper and lower berths large enough to sleep adults.

Powered by two 480hp Caterpillar 3406C engines, she has a cruising speed of 12 knots, giving a range of 2,420nm. She is also fitted with Quantum zero-speed stabilisers.