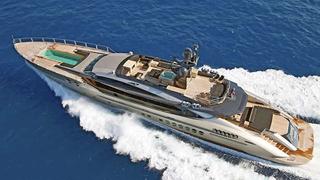 Word reaches me that Camper & Nicholsons International and Edmiston have signed the 52m Palmer Johnson superyacht _DB9 _for sale as joint central agents.

Not to be confused with the 36.5m Palmer Johnson, also called DB9, this 52m was built by Palmer Johnson in 2010, and she is the first in the shipyard's 170 series. Designed by the Italian yacht design duo Nuvolari Lenard, she is built to Lloyds' Class and is MCA compliant.

She has zero speed stabilisers and twin MTU 16V 4000 M93L engines give her a top speed of 30 knots and a cruising speed of 22 knots.

DB9 offers comfortable accommodation for 10 to 12 guests in five staterooms – a master suite, VIP double, double and two twins. She normally carries a crew of 11. Among her many features are an open-air cinema with a projector, a piano in the main saloon, an eight-metre swimming pool on the foredeck, and two Jacuzzis – one on her sun deck and one on her aft deck.