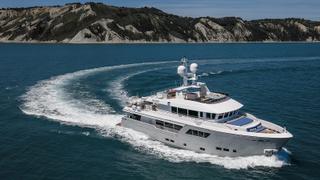 Italian yard Cantiere delle Marche has announced the sale of the biggest superyacht in its Darwin series to an “experienced owner”.

The custom Darwin 112 was sold in July and follows three other sales by the yard in the last seven months; the Aurelia 29, Project MG 129 and Explorer 40.22.

The yacht is a replacement for the owner’s smaller Darwin yacht and will be customised to his requirements.

The owner intends to use the yacht to undertake even longer passages than he did in his former Darwin yacht, which underwent three Atlantic crossings and sailed more than 40,000 nautical miles.

Details about the model remain sparse but the yard did reveal that the owner and his team are already working with designers and engineers to customise the yacht.

The yard said that the Darwin 112 “is designed to sail thousands of miles a year” and emphasised that the “quality of construction, materials and technical equipment are critical to simplify the yacht's daily handling and upkeep.”

It also revealed that great attention will be paid to the layout of the engine room, which will be kitted out with “proven high wear equipment”.

The yacht will also feature “the unmistakable Darwin aesthetics while leveraging on CdM's unique DNA,” the yard said.