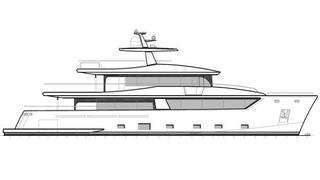 The Ancona-based yard has sold a Nauta Air 108 and a Darwin Class 102. The first three orders CdM received this year were for South American owners, an emerging market that CdM has purposefully targeted, and CdM only plans to intensify this activity in 2015. To date, one third of all CdM yacht orders have come from South America, such as the new build Cantiere delle Marche Darwin Class 96 sold earlier this year. Yet the latest orders come from European owners, with English and Italian owners set to take the helm of the latest CdM explorer yachts.

Designed specifically for use in the Americas, the CdM Nauta Air 108 has a reduced draught for cruising in shallow waters. The full-displacement steel-and-aluminium yacht is a true explorer vessel, promising the over-engineering, equipment redundancies, seaworthiness and transpacific capabilities that Cantiere delle Marche yachts are known for. The Nauta Air 108 will be the first CdM yacht to feature a bulb hull design, and she will also boast a latest-generation dynamic position system. The Nauta Air 108 will boast an ample 70sqm sun deck and a spacious beach club. The main-deck master stateroom will make full use of its 7.5-metre beam, while the 70sqm sun deck offers ample space for outdoor entertaining.

The Nauta Air range is designed by Italy's Nauta Design – the first Cantiere delle Marche Nauta Air 86, Yolo, was launched this year, and hull No 4 is already underway.

The second Darwin Class 102 ordered this year is a sister ship to the one sold in February. Designed by Sergio Cutulo of Hydrotec, the 102 sets itself apart with a stern modification that includes a stern platform accommodating a five-metre tender, while a 6.2-metre tender can be carried on the upper deck. The yacht is designed for extended cruising, specifically to the Caribbean and South America. Notably, this is also the first CdM Darwin class explorer yacht designed with the intention of being available on the charter market.

Cantiere delle Marche reports that four of its five yachts ordered this year have been larger than 30 metres, and it now has a big enough backlog of orders to run at capacity until 2017. Three CdM yachts will be delivered in 2015 with the emergence of the Darwin class 107, 102 and 86.