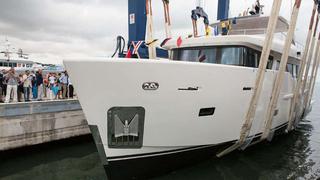 Yolo stands for 'You Only Live Once,' and it's with this philosophy the young and enthusiastic owner of the first Nauta Air 86 approaches life and relationships with people. His aim is to get the best out of each and every experience, a new yacht included. In 2012, he was looking for a yacht with very specific characteristics, and Italian superyacht builder Cantieri delle Marche had just introduced the new Nauta Air line, designed by Mario Pedol and Massimo Gino of Nauta Design. It was love at first sight for the would-be owner, and the order for the first Nauta Air 86 expedition yacht by Cantiere delle Marche was signed. CdM also sold a Nauta Air 88, which is due to be delivered soon.

'I am really satisfied and proud of the customization. I can say that the yard's team have made this a smooth process and been very attentive to all of my queries and countless questions,' says the owner.

The unconventional layout, developed according to the owner's request for an informal and functional distribution of spaces, features a galley nearby the cockpit, to port, followed by a cozy dining and lounging area. The full beam owner suite, accessed through a dedicated staircase, is on the lower deck amidship while two guest cabins – a vip and a twin – share the forward section of the hull with a large gym with adjoining shower and hammam.

A 60sqm flybridge equipped with bar, BBQ, jacuzzi and a second pilot station is probably the biggest found on board a yacht of this size. Two Caterpillar C18 Acert allow for a top speed of 17 knots and a range of 3,200 nautical miles at nine knots.