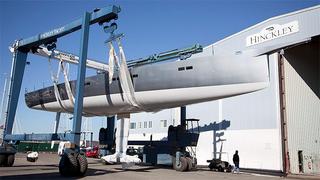 Carbon Ocean 82 – an uncompromising standard in cruising and performance

Brian Benjamin is a single-minded person with high expectations, even for his split personality boat. His Carbon Ocean 82, Aegir II, is the sexy fresh cruiser/racer that he envisioned when he gave Rogers Yacht Group its design brief.

Aegir II was uncompromisingly designed and built for comfortable cruising even in light air and competitive racing in all conditions. Friends and family can cruise for a fortnight on Aegir II yet it can be transformed into a competitive IRC racing boat for upcoming events such as the Caribbean 600, the Heineken Regatta and the Giraglia Race.

When Aegir II is Med tied with a fleet at an international regatta, it will be indistinguishable from a grand prix boat to the untrained. Its 35-meter carbon mast with EC6 rigging will stand as tall as its competitors’. Its deck and Mediterranean cockpit will be as sleek and clean, and its bow prod will stick out just as far.

Aegir II’s interior sets it apart from the rest. Where the rest of the racing set has dark carbon fiber dungeons Benjamin has a comfortable modern “home” with natural light flooding the saloon and cabins. Headliners and bulkheads disguise the strong, weight-saving nomex-aluminium honeycomb used to withstand the loads of the grand prix rig, the 4.6-meter keel and waves.

Says Benjamin, “A cruiser doesn’t have to be older than your grandmother, laden with wood and slow.” In fact, his lightweight 82-foot cruiser can sail in less than 8 knots and cover a lot of distance quickly in moderate winds rather than depend on an iron genny.

Before Benjamin’s racing team crosses the starting line, Aegir II is transformed to a racer. The bomb doors open and the tender is jettisoned from the garage. The shower stall in the master suite, the coping around the mast base, tables and the prod’s anchor cassette are removed to make the racing gear accessible and drop to racing weight. The replacement of the Park Avenue boom and the cruising sails complete the conversion.

Benjamin and Aegir II will be in Caribbean this winter.