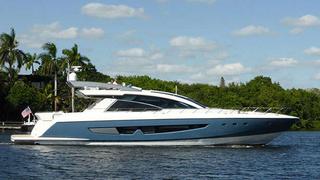 Now introducing the first-ever Alpha 87 Express Sportbridge model, Cheoy Lee has been fine-tuning its Express series. This is its second model to feature a flybridge, after the Alpha 76 Flybridge. Twin Caterpillar C32s engines deliver high performance, with the Alpha 87 Sportbridge estimated to reach a top speed of 33 knots. Her tender is stowed in a dedicated garage.

The 87 Sportbridge motor yacht features naval architecture and styling by Mike Peters, while her interior design by Luiz de Basto. De Basto has given the 26.5m yacht a bright, contemporary motif highlighted in dark veneers and light-coloured, reflective fabrics. The 87 Sportbridge features a spacious en suite owner’s stateroom for a yacht of its size; the full-beam stateroom cabin features a king-size bed.

The Alpha 87 showed off her blue hull and contemporary interior during an evening cocktail party at the Fort Lauderdale boat show. She features an open-plan saloon, with the galley integrated into the layout of the main deck along the portside, across from the lounge. The futuristic helm is a highlight of this yacht series, and the helm area is open to the lower deck, allowing light to flow into the a foyer and creating a spacious, atrium-style feel below decks.