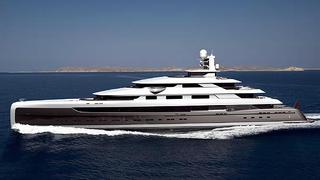 China's Raffles Yacht superyacht shipyard has rebranded as Pryde and will be previewing its new-build 88.8m motor yacht Illusion at next month's Monaco Show.

Pryde will preview its 88.8m superyacht Illusion, scheduled to deliver in early 2015, and a new 115m concept Estatement at the upcoming Monaco Yacht Show

The exterior design of Illusion is by Rainsford Mann and the interior is by Sander Sinot, accommodating 14 guests in seven large staterooms. Based on the styling of Britain's Rolls-Royce motor cars, llusion will be propelled by two 3,000hp Rolls Royce diesel-electric engines delivering a predicted top speed of 14 to 17 knots.

The largest yacht ever built in China, Illusion is for sale at Fraser Yachts.