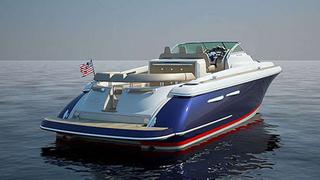 Chris-Craft has officially revealed renderings of its all-new Launch 36.

She features a full walk-around deck to access the forward seating and a full-sized bow sun bed. Another neat touch is an open-air galley and large U-shaped seating, with al fresco dining on a large retractable table that converts to a second, large aft sun bed. Below deck, there are berths for five people, a full sized head and a separate shower.

Not just a yacht-to-shore shuttle, Launch 36 is equipped with built-in storage for a variety of sports equipment such as snorkelling, scuba diving, kayaking, fishing, bicycling and wakeboarding.

The Chris-Craft Launch 36 will debut at the Miami International Boat Show in February 2014.