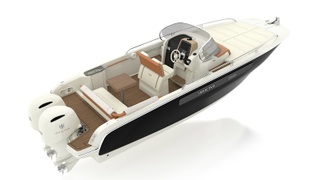 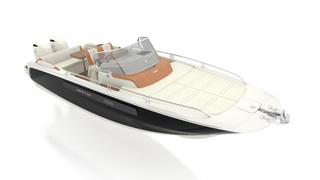 Italian builder Invictus Yacht has revealed details on its latest superyacht tender, the Invictus CX270, just ahead of its world debut at the 2019 Cannes Yachting Festival. The sporty 8.1 metre tender is powered by twin 220-horsepower outboard engines, allowing the CX270 to cruise at 25 knots and reach a maximum speed of 44 knots.

Designer Chirstian Grande – who oversees design for the entire Invictus lineup – created the CX270. Grande has played with the contrast in details, pairing shiny stainless steel with soft leathers. As an option, an owner can extend the solid teak of the cockpit floor to the stern platform.

The CX series marries Invictus’ high-performance hull design with a liveable layout. The cockpit on the CX270 is flexible, and a basin has been added to the port side of the cockpit on the CX270. The stand-up helm seat can transform, lowering to become additional seating for the aft dinette area. The back of the stern seat can be lowered to create a sunbed, which can be further expanded with extra cushions, creating a large sunpad over the engines. This complements the sunpad forward of the helm station.

The CX270 also puts a focus on the interior spaces of this tender, offering a comfortable place to refresh after a day spent out on the water. Invictus claims that the interior space on the CX279 is larger than that of similar sized yachts, with a cabin and separate bathroom found below.

In order for guests and crew to move around safely and easily, all external deck elements are streamlined with the deck surface.

The Invictus CX270 will make its world debut at the 2019 Cannes Yachting Festival this coming September.