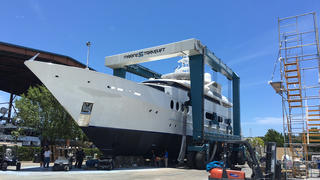 The 42.67 metre aluminium displacement yacht hit the water on July 11 after spending four years in a Florida dry dock.

Never Enough has been refitted three times over the past ten years, but Lauderdale Marine Center explained that this latest refit was by far the most thorough.

Both the exterior paint and the teak decking were replaced, while the shafts, generators, gearbox and engines were also changed. Exterior transformations also included a flybridge extension and a modification to the superyacht aft deck.

Accommodating ten guests across five cabins, including a full-beam main-deck master suite, her original interiors were by Marybeth Crowley, although the refit yard adds that the owner wanted to “tear everything out and start anew” with the aim of extending her cruising life by at least 20 years.

One of the seven classic Feadships that have made history, she was built for Jim Moran, who owned seven Feadships. He specified a concealed tender garage to ensure the sleek lines of the superstructure were not interrupted.