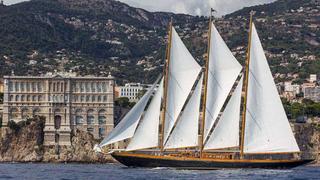 The classic yacht event saw 58 sailing yachts in attendance, 10 of those being 'big boats' coming in over 30 metres LOA, and 37 powerboats including 20 Rivas, as well as 29 12ft dinghys racing together in Monaco for the first time.

Launched by Camper & Nicholsons in 1927 as Vira, Creole was recognised for her return to racing in Monaco after a 20-year absence. She is the largest Camper & Nicholsons ever constructed and her Bermudan schooner rig allows her to be sailed with a limited crew. She was rebuilt in 1958, and then purchased by Maurizio Gucci in 1983, who had her restored back at Camper & Nicholsons between 1984 and 1986. A regular on the Mediterranean regatta scene, she is based in Palma over the winter and used by the Gucci sisters during the summer months.

The Monaco Classic Week also included a chef's competition with Alain Ducasse as jury president, which was won by Creole's chef Juan Munoz. New to the week was a cocktail competition, judged the same jury, and won by Pacha III.

Date's for next year's Monaco Classic Week have already been announced, with the bevy of classic yacht beauties set to descend on Monaco 9-13 September, 2014.