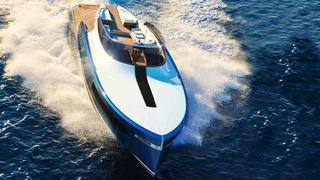 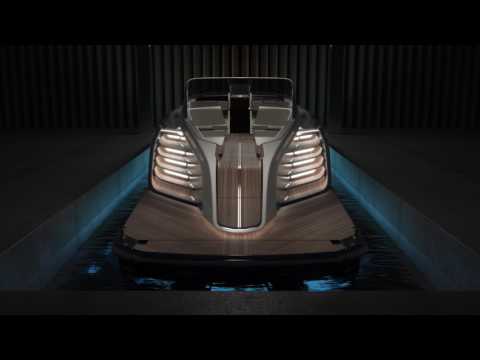 British design studio Claydon Reeves revealed its latest Rolls-Royce collaboration in London today (June 1). The 19.8 metre Aeroboat S6 concept strengthens the British brand's yachting industry ties, as it will be the primary supplier for every system on board.

This carbon and aluminium cruiser is an evolution of the performance-focussed Aeroboat SV12, the studio’s 2013 tie-up with Rolls. Twin MTU V10 2000 M96 engines and a waterjet propulsion system will ensure that the S6 delivers sporty performance out on the open water, riding on a hull developed by British studio BMT Nigel Gee.

Meanwhile, the highly flexible Aerostairs boarding system adds further intrigue to this already appealing package, as it can be raised to the level of a pontoon, extended to maximise the available deck space or lowered to allow easy access to the water.

The studio adds that the use of space on board the Aeroboat S6 has been carefully considered, both above and below decks. This can be seen in the owner's cabin, which is ideal for overnighting, as well as the notably large galley.

The tender garage allows the Aeroboat S6 to carry a 3.8 metre tender or a pair of Jet Skis, while the cockpit will be offered in hardtop, bimini or open guises.

An exclusive appointment-only Aeroboat boutique is open now in Kensington, London, allowing clients to experience the full Aeroboat range, which extends from 16.8 metres to more than 30 metres.

Other upcoming projects under development at the British studio include the 36 metre Mulder Yachts flagship Delta One, which is due for completion before the end of the year.