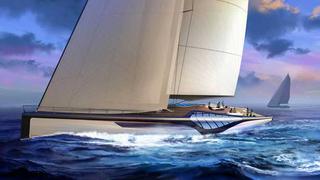 The carbon sloop, which will feature solid naval architecture by Dykstra, was inspired by natural forms. For example, the styling of the superstructure was inspired by the exoskeletons of insects, whose curves have evolved to imbue them with optimal strength, while the mast has standing roots reminiscent of a tropical tree, with the hull as the strength-giving root ball. The designers’ desire to maximise views of the natural environment from inside the yacht is part of this overall ethos.

‘The big thing about the boat is the amount of light we want to come inside, so the potential owner is able to use the inside as well as the outside,’ says James Claydon, a founding partner of Claydon Reeves. ‘You could be downstairs and enjoy the passing views, whereas often on sailing yachts it’s a bit of a black hole down there.’

Guests would have grand views of the seascape from the living and dining saloon’s large windows, which are also low enough that guests could watch water ‘lapping up at the lower edges’ when heeling. Forward of saloon there are three twin crew cabins and a double captain’s cabin, while aft there are three guest cabins, an owner’s suite and towards the stern, a light-filled ‘beach club pavilion’.

In terms of technical requirements, the main load bearing elements will be constructed from a carbon monocoque space frame, similar to that of a modern motorbike, while the hull skin will be developed using lighter construction methods. The deck caulking is based upon the radiating growth rings of a tree trunk, which illuminate at night. The twin helm positions grow out of the bulwarks like tree branches.