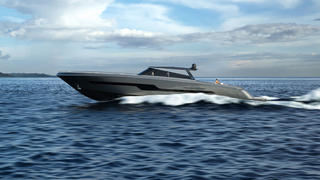 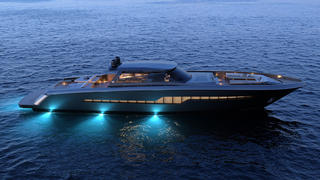 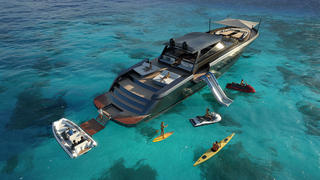 Italian yard CNM Yachts has revealed plans for a 33 metre open yacht, which is currently under development.

The Continental 110 project has already attracted its first client, with pre-build negotiations in progress and an estimated delivery date of 2018.

Interiors will be completely customisable and CNM plans to work with a different designer on each model to ensure every Continental 110 has a unique character.

CNM claims that the interior finish will be “of the highest quality ever seen on this type of yacht” and describes the project as “the largest open yacht in the world”.

What’s more, a shallow draft of 1.1 metres would allow owners to explore remote areas with ease.

The yard has carried out CFD and tank testing with a view to fitting a pair of 2,600hp MTU engines on Arnesen drives, giving the CNM Continental 110 a top speed of 42 knots, matching its sporty styling.

Other options include a waterjet boosted triple 2,600hp engine set-up, which would result in a top speed in excess of 50 knots. If built, this version would easily qualify as one of the fastest yachts in the world.

The layout includes four double guest cabins below decks and three crew cabins in the rear.

Key features include a 4.5 metre tender garage for swallowing up all manner of water toys, stabilisers, carbon fibre hard-top, and fold-out side decks suitable for fitting a slide. The finished article will be built to MCA LY3 standards.

Founded in 2003, Cantiere Navali del Mediterraneo is based in Rome and its current largest model is the Continental 80, a planning yacht capable of 45-knots.