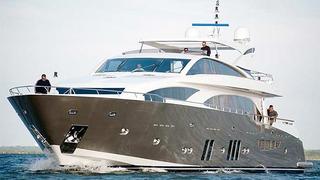 CNC's owner killed on his yacht off Corsica

Every French newspaper reported the news this morning of the fatal shooting of Fabrice Vial, owner of CNC (formerly Couach Yachts), on his 37 metre motor yacht anchored off Porto-Vecchio, Corsica.

The only confirmed details at the moment are that Fabrice Vial was fatally shot in the back at 1am this morning. A police investigation is under way, but according to unofficial reports the shot was fired from another boat. Eight other people were on the yacht at that time, but no one else was injured.

The 43-year-old Fabrice Vial headed Groupe Vial, the leading industrial joinery in France. A long-time yacht enthusiast, he entered the yachting industry recently when he saved Couach Yachts from bankruptcy in 2009, following which the yard was renamed CNC (Chantier Naval Couach).