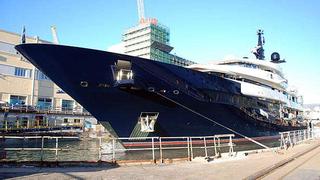 Amico & Co has announced the recent completion of two major superyacht refits at their Genoa facility - Seven Seas and Apogee.

Seven Seas, the 86m Nuvolari-Lenard designed superyacht launched by Oceanco in 2010, was at Amico & Co for a period of three months. Her refit included an Awlgrip blue hull top sides re-spray plus various maintenance jobs, and was managed by the yard in collaboration with Oceanco and Wright Maritime Group.

Apogee, the 62m Codecasa superyacht launched in 2003, was also at Amico & Co for three months. Her refit took place inside the sheltered dry-dock facility where a new Alexseal topcoat was re-sprayed and a 10-year Class survey was completed. The work was managed by Captain John Fleckenstein and Andre Peens from International Yacht Collection.

In both cases, the re-launch of both superyachts took place before the contractual deadlines. Alberto Amico, President of the shipyard, added: "In these last three months we had 16 projects performed on board +50m LOA yachts visiting our yard, and other 14 projects performed on yachts under 50 m LOA."

The next step for Amico will be the completion of a new 102m covered dry-dock in August 2014, allowing more simultaneous refits for yachts up to 100m.