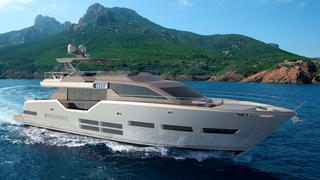 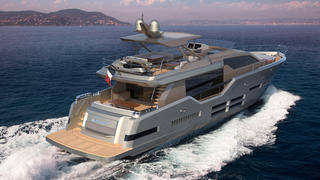 Couach Yachts teams up with Espen Øino for Timeless range

French yard Couach Yachts has announced a new partnership with renowned superyacht designer Espen Øino, who will be creating three new Couach ranges over the next 18 months.

The first of these ranges is the Timeless collection, which will include the 26.2 metre Timeless 2600 (pictured below) and four other yachts measuring between 20-40 metres LOA. Coauch adds that Øino will also be styling a 20-40 metre Super Sport collection as well as a Super Yacht collection (over 40 metres).

Speaking about the Timeless collection, Øino said: “We wanted to draw upon the historically strong identity that Couach had between the 1970s and 1990s; to bring back something that was distinctive and instantly recognisable with strong, meaningful lines.”

Key features include an extensive flybridge sundeck and full-height windows that open completely to allow the maximum amount of air and natural light into the saloon. The cutaway exterior bulwark accentuates this effect.

Accommodation on board the Couach Timeless 2600 is for 12 guests and 3 crew, while the twin MAN V12 engines will mean a top speed of 30 knots and fast cruising at 24 knots.

Øino, who is best known for his work designing some of the world’s largest superyachts, added that this design was a new challenge for him: “With a smaller yacht, you need to be more self-disciplined in your design work, and make it more purposeful; every centimetre counts.

“It is as exciting — if not more exciting — than designing a very large superyacht because you can personally relate better to the vessel,” he continued. “You can imagine yourself enjoying being on board, including driving the yacht yourself.”

Based in the port town of Gujan-Mestras, Chantier Naval Couach is one of France’s oldest yachting brands. Other projects currently under development at the yard include the Couach 4400 Fast Fly, which is due to be launched before the end of the year.