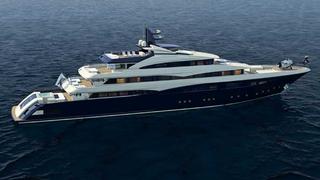 Italian builder CRN has commented on the launch of its 60m superyacht J’Ade and revealed details of a 74m project currently in-build.

The steel and aluminium motor yacht J’Ade was designed by studio Zuccon International Project, with naval architecture by CRN’s in-house team. ‘She’s very important because she’s the first vessel from our new custom built line,’ says Luca Boldrini, CRN sales director. ‘When we presented Alouette II (ex-Ability), she was very liked in line and volume and many people wanted the same – we made eight near-replicas. Everyone thought we were like Amels making Limited Editions. In reality it was never our business model. So we stopped this and started to only take orders for custom built boats.’

J’Ade features a floodable lower deck garage, a sundeck helipad and gym, and styling that Boldrini describes as ‘cutting edge’ and ‘military’. Her delivery is scheduled for spring 2013.

CRN’s 74m, another custom project, was also designed by Zuccon. It will become the brand's second largest yacht, after the 80m flagship CRN 129, which is also in-build.

The 74m hull 131 will have five decks and will accommodate 12 in five guest cabins and an owner's suite (on an owner's deck), as well as 28 crew. Decor will be by Central Stile CRN. Features include a fold-down beach club, wine tasting area, several balconies and a greenhouse for the owner's Bonsai collection. Twin Caterpillar 3516 engines will offer 2,000kW at 1,600rpm, an estimated cruising speed of 15 knots and an estimated maximum speed of 16.5 knots.

The hull is complete and the superstructure is being mounted. Launch is slated for spring 2014.