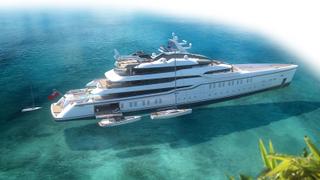 CRN teams up with Harrison Eidsgaard for 86m explorer

Italian yard CRN has revealed the first details of a new 86 metre explorer yacht concept that has been developed in collaboration with London-based studio Harrison Eidsgaard.

This sleek, modern design was conceived for an owner who enjoys long voyages with his family and wants to explore remote destinations. Key emphasis was placed on tender and toy storage as well as constant, direct visual contact with the sea.

The latter is achieved by extensive use of glazing, creating panoramic vistas from all the guest areas, while the owner’s deck includes a full-length terrace, evoking the style of a New York loft apartment.

Functionality can be seen throughout the design and layout, with the crew operation areas kept distinct from the guest areas. What’s more, the foredeck would be fitted with a davit crane capable of lifting superyacht water toys weighing up to 45 tonnes.

“We now want to go back to those values that have led us to be what we are today,” he added. “We are really excited about this new cooperation [with Harrison Eidsgaard], which has resulted in a very original concept.”

Further details are being kept under wraps for now, with the total guest accommodation, engine installation and estimated performance figures undisclosed.

Other superyacht projects currently under development at the Italian yard include the 79 metre Project 135, which is due to hit the water in Ancona next year sporting exterior styling from Rome-based studio Zuccon International Project.