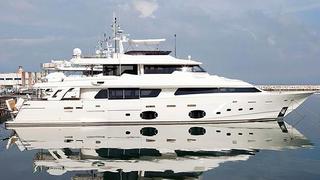 Custom Line announces the delivery of another Navetta 33 Crescendo, the 12th one of this successful range.

Based on the highly successful Navetta 30 and Navetta 33 series, the recent Crescendo version offers many improvements since her (re)launch in 2011. Designed by Advanced Yacht Technology and Studio Zuccon International Project, this 32.62 metre motor yacht is entirely customisable apart the structural details.

This yacht accommodates eight guests in four cabins including a master on the main deck and three doubles on the lower deck. The usual fifth guest cabin on the lower deck was replaced by a gymnasium with a Turkish bath.