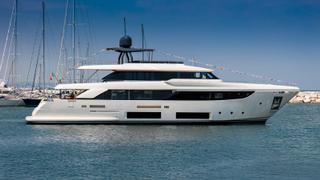 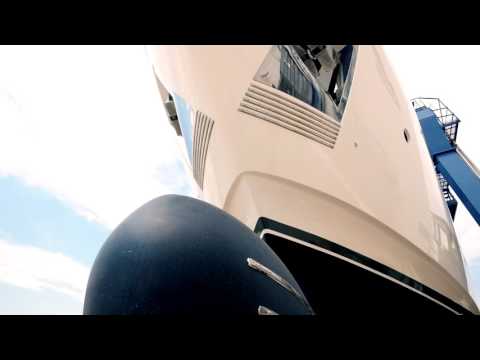 Italian yard Custom Line has announced that the first model in its new Navetta 33 series hit the water in Ancona last week (June 22).

Designed in collaboration with Zuccon International Project, this new 33 metre tri-deck yacht has proved hugely popular, with the first five hulls already sold — three of which are due for completion before the end of the year.

Alberto Galassi, CEO of parent company Ferretti Group, said: “The Navetta 33 will define the nautical landscape in the years to come with its irresistible beauty. It outclasses every other boat within the same category — it’s essentially in a league of its own.”

The yard added that the Custom Line Navetta 33 features a bulbous bow for greater stability and seaworthiness, while the maximum range of 2,000 nautical miles means that owners can look forward to extended cruises around the Mediterranean and beyond.

Accommodation is for up to ten guests split between five staterooms, including a full-beam owner’s cabin on the main deck. A fold-out superyacht terrace provides great views out to sea from the main-deck saloon, while the upper deck features sliding windows, allowing this area to be opened up to the elements. Another star feature is the superyacht sundeck, which boasts a spa pool and a large sunbathing area.

Particular attention has been paid to reducing noise and vibration levels on board, with a flexible joint in the transmission lines that should absorb shaft vibrations. Hydraulic fin stabilisers will be fitted as standard, while optional extras include a gyroscopic stabiliser system from Seakeeper.

Engines from MAN and Caterpillar will be made available, with the most powerful option generating 3,244hp for a top speed of 16 knots. However, the first hull will be fitted with a smaller 2,800hp MAN V12 set-up that tops out at 15 knots.

Following the completion of sea trials, the first Custom Line Navetta 33 yacht will be presented at a private preview event in Ibiza next month, while the public debut will take place in September at the Cannes Yachting Festival.