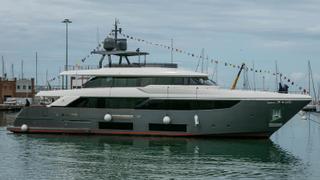 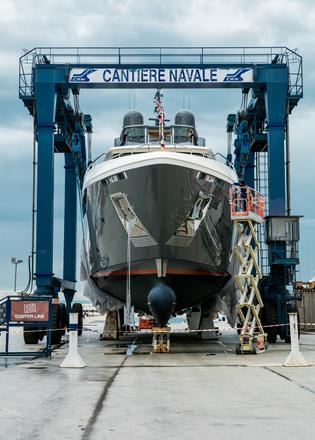 The Custom Line Navetta 33 series welcomed its newest member earlier this month when Mirabilis hit the water in Ancona.

Launched on April 5 for a repeat client, this is the third Navetta 33, following on from December Six and Telli. The series was designed with Zuccon International Project and introduced last summer.

Frank Grzeszczak Jr of IYC acted as owner’s rep on this project and worked closely with naval architect Giuseppina Arena and captain Jesus Gonzalez on a wide range of customisations.

“This model was chosen after more than two years exploring the market for the yacht that would meet the owner’s family needs,” Grzeszczak added.

The brief was for a tri-deck yacht with elegant, yet aggressive lines. The owner was also looking for a five-cabin layout, high interior volumes and a bright interior for showcasing a private art collection on board.

Power comes from a pair of 1,622hp Caterpillar C32 engines for a top speed of 16 knots. When trimmed back to her cruising speed of 13 knots, Mirabilis will boast a 1,120 nautical mile range, drawing on a total fuel capacity of 20,000 litres.

Delivery is scheduled to take place next month, after which point Mirabilis will head off for her debut season cruising around the Mediterranean.

Other superyacht projects currently under development at the Italian yard include the first Custom Line Navetta 42 yacht, which is due to hit the water before the end of the year.