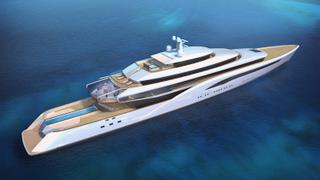 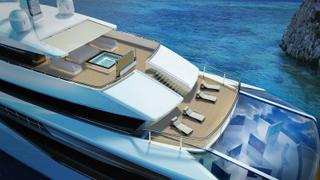 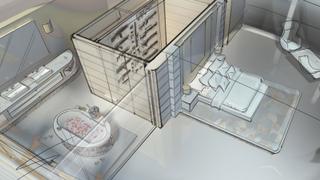 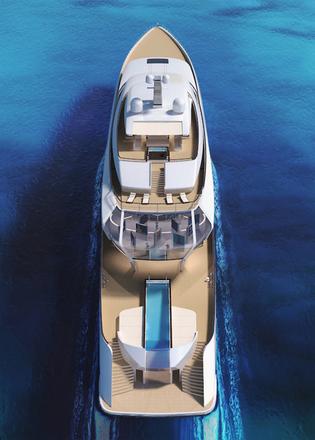 Inspired by the Sky Atlantic television series Riviera, this design is intended as the ideal yacht for lead character Constantine Clios. As a result, it features a gallery for storing his extensive art collection and an en-suite gun cabinet — a necessary precaution for a man caught up in a murder-strewn plot.

Steponenas, who was the winner of the 2016 Superyacht UK Young Designer award, added: “My focus here is not the craziness of the surfaces but opulence, which is derived from classic designs. In my opinion this design would easily blend into a French Riviera environment.”

Other key features on board Ectheta include a foredeck superyacht helipad, an infinity pool on the aft deck and an open-air cinema on the upper deck.

Accommodation is for 16 guests split across six cabins, including a master suite and a VIP cabin. Meanwhile, the crew cabin allows for a staff of up to 35 people, including auctioneers and art gallery curators.

Take a closer look at the Ectheta superyacht concept

The propulsion system has yet to be disclosed, but Ectheta has been designed to cruise at speeds of up to 19 knots. When trimmed back to 12 knots, it would boast a maximum cruising range of 5,000 nautical miles.

Fans of Riviera will no doubt be keen to see this concept realised in season two, after the opening episode of season one saw the dramatic demise of Clios’ yacht, the 55.4 metre Turquoise.