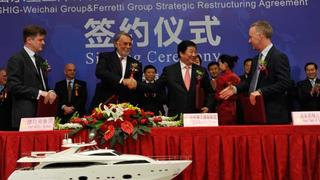 Details of the deal which sees the Shandong Heavy Industry Group-Weichai Group acquire a controlling interest in luxury Italian yacht manufacturer Ferretti have been confirmed.

SHIG-Weichai Group will acquire a 75 per cent interest in the yacht maker through a total investment of €374 million, including equity investment of €178 million and provision of debt financing of €196 million, after the completion of the debt restructuring procedures.

Existing creditors - RBS and funds under the management of Strategic Value Partners - will acquire the remaining 25 per cent interest in Ferretti, each becoming 12.5 per cent shareholders, through a €25 million equity injection and debt to equity swap.

Through the acquisition, Ferretti’s capital structure will be fully restructured with equity capital increase by €100 million and total debts reduce to a reasonable level at around €120 million. This strong capital base will help drive Ferretti's long-term development plans.

The Ferretti Group will retain its key management team, headquarters and production bases in Italy, while the SHIG-Weichai Group will jointly explore the luxury yacht market with Ferretti, facilitating its expansion in emerging markets, with a particular focus on Greater China, which will be an important growth engine for Ferretti’s future development.

In addition, the Group will provide a range of other resources including capital support to Ferretti to stimulate its rapid business development in its traditional European and American markets.

Commenting on the Chinese conglomerate's first foray into luxury yachting, the chairman of the SHIG-Weichai Group, Mr Tan Xuguang, said: 'Developing the yacht business is one of the Group’s strategic goals for the next five years. Ferretti, which possesses iconic international brands, state-of-the-art manufacturing technologies, products of the highest quality and an extensive sales network, is an ideal partner.

'Through the acquisition, the Group will cooperate closely with this world-renowned yacht maker, providing Ferretti with new channels to market and capital support as well as other resources with which it can expand more effectively into emerging markets, a key area of potential growth for Ferretti.

'Synergies between the Group and Ferretti can be unleashed through the sharing of resources and industrial integration. Ferretti’s overall competitive advantages in production cost, sales channels, after-sales service and financial strength will be improved, creating a win-win situation that will allow Ferretti to consolidate its leading position in the luxury yacht market.'

Mr Norberto Ferretti, chairman and founder of Ferretti Group expressed his pride in being able to join forces with such a prestigious partner, saying, 'We are strongly convinced that this partnership will lead to very satisfactory results and will provide Ferretti Group with a strong capital base which will allow the development of long-term growth plans. Moreover China is one of the most rapidly developing countries for the yachting sector and has great potential for the coming 5 to 10 years'.

John Davison, RBS Global Head of Strategic Investment said 'RBS has a longstanding relationship with Ferretti Group and have a very high regard for the business that Norberto has built. We are delighted to have the opportunity to invest alongside SHIG-Weichai in Ferretti and look forward to a very successful partnership with SHIG-Weichai and continuing our relationship with Ferretti.'

Ferretti, the world's largest luxury yacht manufacturer, boasts one of the world’s most advanced naval research and development centres (AYT – the Ferretti Group’s Advanced Yacht Technology) and a team of architects and designers (Centro Stile Ferrettigroup). It also has a comprehensive global supply chain, which includes more than 800 suppliers, as well as some of the world's most advanced yacht manufacturing systems. Ferretti has eight highly regarded and recognised yacht brands and owns a total of eight shipyards in Italy as well as in Miami, USA, employing nearly 2,000 employees.

The SHIG-Weichai Group is one of the most comprehensive and competitive equipment manufacturing groups in China, offering a broad range of high quality commercial vehicles, construction machinery and other heavy-duty industrial products such as power generation systems and auto parts. The Group acquired French marine power company Moteurs Baudouin SA in 2009 through its subsidiary Weichai Power Co., playing a vital part in establishing Baudouin’s leading position in the marine power market.

The financial crisis in 2008 and prevailing market conditions have posed unprecedented challenges to the yacht industry around the world, causing an industry consolidation that has resulted in some of the world's largest yacht companies seeking new business partners and shareholders. Meanwhile, yacht sales in emerging countries such as Brazil, Russia, India and China have continued to grow rapidly - in the case of China, yacht imports saw a threefold increase from 2009 to 2010. Industry experts anticipate great potential in China’s luxury yacht market in the next 5 to 10 years as the popularity of yachting increases as a recreational activity among China’s growing middle class.