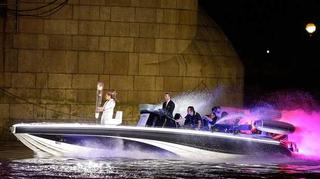 Details on the Bladerunner: the British speed boat that carried the Olympic flame

One boat that had a billion eyes of the world on it in recent days was the Bladerunner, the 70-knot speed boat used to carry the Olympic flame up the Thames to the stadium for the Opening Ceremony of the 2012 Olympic Games on 27 July.

This sleek, futuristic boat is a 'stabilised, air entrapment monohull', designed by naval architect Lorne Campbell, and developed and built by British yard Ice Marine. But it was chosen not so much for its looks as for its extremely smooth ride in any sea conditions.

To ensure the dignified transportation of the flame across potentially choppy waters the Bladerunner was fitted with a special seat, built by Ullman Dynamics, which safely supported 16-year-old torch-bearer Jade Bailey in her near-standing position in the bow holding on to nothing apart from the torch. Ullman suspension seats are standard on London Metropolitan Police boats and Royal Marine Offshore Raiding Craft, vessels used to patrol the Thames - a waterway renowned to be challenging for small boats with its combination of currents, winds and wake from other vessels.

Standing at the helm - an Aerodynamic Steering Console designed by Swedish scientist Dr Johan Ullman - was English footballer David Beckham, who took the controls for most of the way despite having had only three days training beforehand, with builder and former world champion boat racer Jeremy Watts at hand to take over for the last stretch in the canal and the docking at the Olympic Park.

Large coloured spotlights on the stern lit up the smoke ejecting from the 'jet engines'. Spray was created by a water intake device on the stern which reduced the top speed of the boat from 72 to 42 knots despite its two Verado 300 engines.