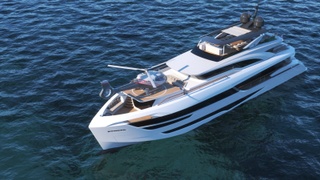 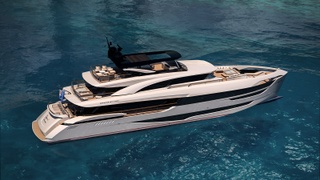 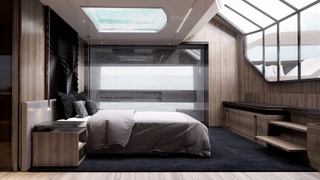 The project was announced at the yard's 20th anniversary party. It comes after the yard extended its Ilumen range to include two new models in June last year. The 36 metre and 38 metre Tri-decks models joined the range, which features naval architecture by NavalHEAD and interior design by Luca Catino. The range also includes a 28 metre and 24 metre model.

Named Peppermint and currently under construction, the 42 metre “mini explorer” is offered with either a semi-displacement or displacement hull and has a transatlantic range of 4,500 nautical miles at 11 knots. The yacht also features the option to have a touch-and-go helipad at the bow.

Decks and spaces on board the yacht have been inspired by different continents. The flybridge has a Middle Eastern theme with subdued colours, a hookah lounge and traditional bar and was likened to a “Marrakech café”.

The upper deck meanwhile has been inspired by Asia and comes with a lifestyle and detox area complete with a yoga studio, workout room, smoothie bar and expansive windows for long reaching sea views.

The aft cockpit, main saloon and galley have been inspired by Europe, specifically Milan, with large open spaces, and a seamless connection between the interior and exterior.

Lastly, the owner’s cabin has been inspired by New York and has been styled to resemble a modern loft-style penthouse in Manhattan. Designed for long periods at sea, the cabin features large glass walls and windows, contemporary décor and an office complete with a teleconference screen.

Speaking about the yacht, the yard said: “The owner’s passion for travelling the world influences the design of each area.”