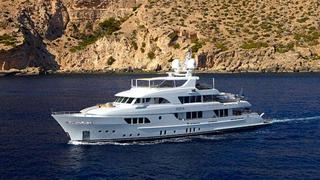 Moonen Shipyards has introduced its new majority shareholder, who according to the yard is, 'committed to invest in the long-term future' of The Netherlands-based superyacht builder.

The new shareholder is none other than the new owner of Moonen's largest superyacht launch to date, the 42m Sofia, delivered August 2013. Beyond being the Dutch yard's largest yacht, Sofia also turned heads for her interesting tender – a three-seater yellow submarine.

Sofia is the third Moonen superyacht to be owned by the new shareholder; his first was the Moonen 84 Sofia (now Eleonora) in 2004, and he followed this by commissioning a Moonen 97, launched in 2008.

'My experiences with Sofia and Sofia II emphasised the quality of design and build available at Moonen,' says the new majority shareholder as Moonen. 'The yachts were very reliable, and everyone I welcomed onboard was impressed by the construction, low noise levels and immaculate carpentry work. So when the time came to fashion my new yacht, the choice to partner with Moonen was easily made. And the same applied when I had the chance to buy into the company as a whole. With its skilled staff and first-class management team, Moonen has the sort of uncompromising commitment to meet and fulfil client wishes which I expect from my own businesses.'

Moonen Shipyard's CEO Emile Bilterijst comments, 'We are very pleased with the new arrangements in place to secure the long-term future of Moonen Shipyards. Although Moonen has built up a superb reputation and client base over the past half-century, in the current economic climate new and repeat clients alike expect specific financial guarantees before they will proceed with a new project. These are now firmly in place at Moonen, along with the option for trade-ins. We are now moving into a new phase of development that will see a range of diverse designs combined with the traditional craftsmanship that sets Moonen apart.'

These new designs include a new series of superyachts aimed at a younger generation of yacht owners, of which Moonen is set to build the first 24m motor yacht in the new series, the rendering pictured above.