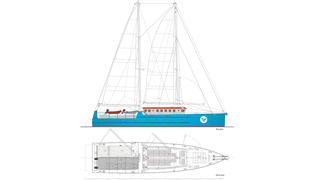 This 35 metre motorsailor has been designed to fulfil the charity’s aim to “go where others cannot”. Sea Mercy works with several private cruising vessels to provide emergency relief to remote areas such as Fiji and Sea Bridge One would serve as the mothership of the fleet.

Louis Hamming from Vitters, said: “To be able to contribute to such a worthy program as Sea Mercy is a real honour for us, and we hope our experience and technical expertise will mean that Sea Bridge One exceeds the operational expectations and demands put on the vessel.”

The idea for a new mothership was born in the aftermath of Cyclone Winston, which brought widespread devastation to Fiji in February 2016.

Gerard Dykstra of Dykstra Naval Architects explained the multiple functions that Sea Bridge One will need to fulfil: “Sea Mercy needed a vessel for their remote island program; a transport support barge, a floating hospital, an educational research and training vessel, a disaster response and recovery vessel, an economic development delivery platform, or a combination of some or all the above.”

Sea Bridge One would feature a total sail area of 500 square metres, while auxiliary power would come from a pair of 268hp Caterpillar engines drawing on a total fuel capacity of 40,000 litres.

The project is now in the final fundraising stage and a shortlist of build partners has been drawn up. Should she be built, Sea Bridge One will join the worldwide fleet of yachts that are being used to help charities.