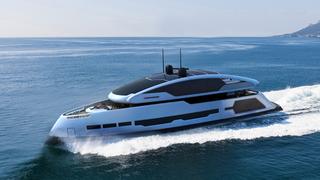 SU-36, named for ‘submarine’ and the Russian fighter aircraft manufacturer Sukhoi, incorporates details that often have a practical function too. For example the styling of the wheelhouse evokes the fuselage of an aeroplane and makes the yacht more 'aerodynamic'.

‘Despite their differences, submarines and aircraft, two sectors completely opposite functionality have many commonalities, including hydrodynamics and aerodynamics,’ says El Mahmoudi Mahjoub.

On top of the unusual styling, the roof of the yacht is covered in solar panels to reduce fuel consumption and meet the energy needs of the yacht. Inside, the layout is configured to maximise the panoramic views onboard, as are large flush and slightly recessed windows. Exterior decks include a main aft deck with dining table and lots of built-in seating, an upper aft deck with a glass-panelled spa pool and sunpads in the foredeck.