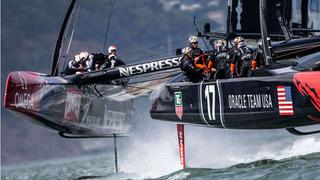 Oracle Team USA at first led the race at the start and on the first two mark roundings, but soon the Challenger had overtaken the Defender after two tacks on the three-nautical-mile upwind leg – and they gained speed and took the lead. Emirates Team New Zealand now led the series by 4-0 after the victory – the overall winner will be the first team to win nine points. For New Zealand, this means five more races to be won, but Oracle Team USA must win 10 more races due to a negative point penalty imposed by the International Jury prior to the start of the Cup Finals.

Before the start of Race 6, Oracle Team USA took a different tack entirely and decided to use its one 'postponement card.' Both teams are entitled to a postponement card, only to be used to postpone a day's second race, regardless of reason.

'We need to go back and regroup. We feel they have an edge on us at the moment, especially upwind,' says Oracle Team USA Skipper Spithill. 'We need to do a bit of work here and we’re going to play the card, strategically, and hopefully improve in time for the next race.

'It wasn’t just upwind performance,' says Spithill, referring to his team's performance in Race 5. 'There were a couple of mistakes there, tacking as well, which is something we need to address. We need to up our game. We’re not going to hide from that. We’re going to go away and do what we can to be ready for the next one.'