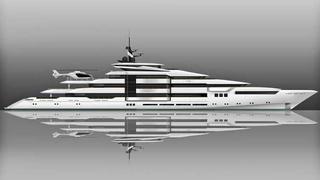 Enrico Gobbi of Team for Design has given Boat International an exclusive preview of his new 88.5m superyacht design.

The Italian designer penned the concept for a prestigious yard, as a response to feedback from the market for yachts of this size. Gobbi has interpreted the layout and styling to create a boat that offers the looks and lifestyle now being demanded.

‘It is a sleek design, nicely proportioned, stylish – not a big palace,’ says the Italian designer. ‘Another part of the brief was to have a lot of glass – clients want wide windows for views.’

Gobbi meshed the requirement for glass with a private owner’s deck – a popular feature. ‘On the two uppermost decks is the two-level master suite,’ he says. ‘It’s common to have this location but in this case, the owner has 300 degrees of panoramic views from a private glasshouse/skylounge on the top deck.’

This ‘glasshouse’ has bathrooms and a private gym, which could be configured to overlook the suite’s living areas a deck below, through two atriums. External decks on both levels are private to the owner. He could arrive at the touch-and-go helipad on the upper deck aft and walk straight into the lower level of the suite, avoiding guest areas.

A three-deck-high section of superstructure bulges out starboard amidships and a glass panel runs through the lobbies of all these decks, offering panoramas from floor-to-ceiling glass.

Outside, the beach club’s two-level swimming pool is connected by a waterfall. The top pool has a bar and a cascade from the upper deck, while the lower one can be used as a spa pool. The transom is openable for extra space. ‘When the transom is closed it is more elegant from an aesthetic point of view,’ says Gobbi. ‘Also, you can guarantee security. Nobody can arrive in a tender, jump on the platform and go up.’

Subject to owner preferences the yacht will have four double guest cabins and a VIP on the main deck, plus an upper deck VIP, and will sleep 25 crew. The design has been assessed technically as far as possible, so that upon commission it will be ready to build.