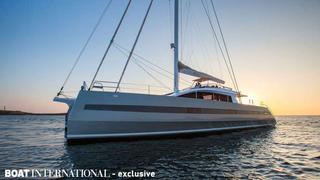 JFA Yachts launched the first Long Island 85’ catamaran this April. The 26.25 metre WindQuest is the first in JFA's semi-custom Long Island series of yachts. The fast-cruising cat's construction method of aluminium hulls bonded to a composite structure was chosen by her designer, La Rochelle, France-based naval architect Marc Lombard, with weight savings in mind. She displaces 60 tons at light displacement. WindQuest is outfitted with up-to-date sail technology, included a carbon mast and boom, and her hydraulic winches allow her to be operated by a small crew. As a weight savings measure, teak decking is only used forward of the owners' cabin and in the cockpit.

The JFA Long Island 85 is designed with plenty of deck storage for toys, and WindQuest in particular has a large garage that stows four bicycles. The tender launch system is also designed to save weight; a retractable pole and the main boom is utilised to launch her 4.8m tender that's stowed aft the cockpit. The large cockpit hosts a dining table, sunpads and a dedicated day head, and the space can be enclosed. Above, the flybridge has a helm, winches for sail control, and a further seating area and sunpads for lounging.

WindQuest has a layout with three staterooms and an office. The full-beam owners' cabin boasts 180-degree views and is unusually spacious for a yacht of her size. There is a private deck space set just forward of the owners' suite. The owners' bathroom is set in the port hull, along with the office. Further guest cabins are found aft in the port hull and in the starboard hull. There is also a crew quarter including a captain's cabin, crew galley and mess. In total, eight guests and six crew can be accommodated. This is just one of the many layout options for the JFA Long Island 85, which can also be had with four or five guest cabins instead.

After completing her maiden voyage in southern Brittany, WindQuest will sail along the English Channel and down the Atlantic coast from London, UK, to Lisbon, Portugal, this summer before heading to the West Indies in the Caribbean this winter.