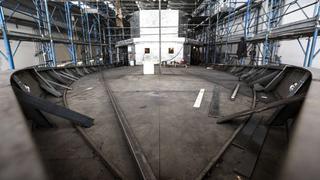 The steel and aluminium yacht simulates the classic style of the 32m early 20th Century British yacht Taransay, designed by Watson’s of Liverpool, for whose exterior style the client had a particular fondness.

‘The owner was in love with old style boats, in the past he had taken a lot of charters in classic yachts and now he wanted a boat for him,’ says Rossinavi COO Federico Rossi. ‘He had in mind the boat Taransay.’

The new project combines contemporary technology, a more modern layout (featuring classical touches, such as a slight camber and a nautical-feeling dinning saloon forward on the main deck) and a lengthened hull with exterior design and styling reminiscent of the original. Naval architecture and exterior styling comes from the yard’s in-house team in collaboration with STB Italia. The interior, designed by Studio Tassin, accommodates 10 guests in five cabins, including a full-beam master suite on the lower deck. Crew quarters are for seven.

Modern concerns did affect even the exterior aspects of the design, since the amount of wood used on the original would contravene modern fire regulations – but the yard worked hard to preserve an authentic look and feel despite this.

For example, Rossi says: ‘The original pilothouse was in wood but to make it to MCA rules we built in aluminium and covered it with teak plate.’

A particularly interesting piece of kit is the aft upper deck crane, built by Rossinavi, which will be concealed inside a funnel. When it is needed to lift one of the two tenders stored there into the water the funnel will open and the crane’s arms extend out.

Rossinavi worked on the Watson’s of Liverpool design, adjusting the hull to improve the way the boat sits in the water and reduce inclination dramatically.

Noise and vibration insulation was a major project, with floating decks and silent blocks to reduce noise, as well as pragmatic layout decisions, such as placing the bathroom of the owner’s cabin forward, between the cabin and the engine room.

‘For us the comfort is very important,’ says Rossi. ‘We have an engineering office dedicated to comfort on the boat, we study electro magnetic interference for example because on a yacht there are a lot of electrical components.’