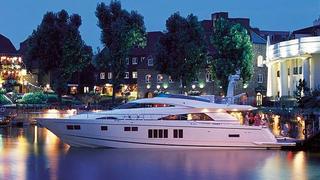 Fairline Boats launched its most customised model ever, a Squadron 78 Custom yacht called Match 2, at this year’s British Motor Yacht Show in Swanwick from May 17th-19th.

This has been one of the Fairline's most challenging build projects to-date, and following initial discussions in the summer of 2011, more than 2,000 man hours have been spent on top of the standard build to create Match 2, which features almost 400 custom items.

The owner of Match 2, said, 'I bought my fourth Fairline, a new Squadron 78 Custom in 2010, and enjoyed a couple of seasons of great cruising with family and friends in the Mediterranean. The boat was perfect and never missed a beat, and it held its value so well that it made good financial sense to sell it last year. I’m aware of the many good alternative boats that could have replaced it but chose to buy another Squadron 78 Custom.'