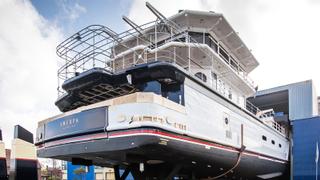 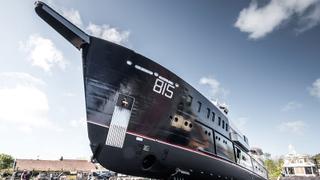 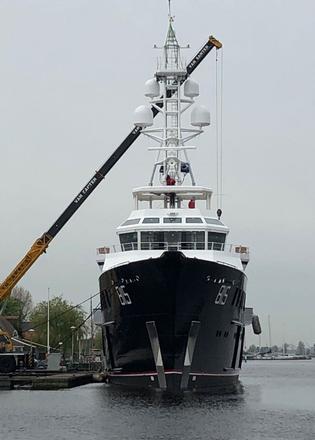 Feadship’s 73.6 metre Sherpa has been filmed undertaking her sea trials in the North Sea.

It comes after the yacht, which was previously known as Project 815, was moved from the Dutch yard’s Royal van Lent facility in Kaag to Rotterdam last week.

Developed in close collaboration with British designers RWD and brokerage house Cecil Wright & Partners, who previously worked on the 78.5 metre Hampshire II, this is the first Feadship to feature an unfaired hull.

Sherpa’s name reflects her immense carrying capacity, with vast expanses of open deck space for storing everything from tenders to helicopters. What’s more, her two giant boom cranes, the largest ever fitted to a Feadship, will offer a maximum reach of 20 metres.

Sherpa will feature luxury finishes such as teak decking, stainless steel detailing and accommodation for up to 13 guests, as well as 22 crewmembers.

She will also offer plenty of room for al fresco relaxation as the tender garage can be converted into a superyacht beach club through a clever system of folding and rotating bulwarks.

Her technical launch on April 26 was followed by the installation of her dedicated wheelhouse, another Feadship first, and a towering mast with a built-in elevator and observation platform, which will make Sherpa the tallest Feadship in the yard’s fleet when she is delivered.

Other superyacht projects currently under development at the Dutch yard include the 110 metre flagship Project 1007, which was styled inside and out by Michael Leach Design.