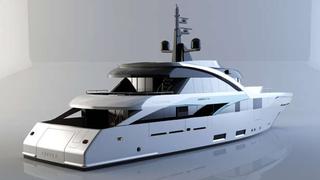 The superyacht has been given the project name SLeek 39m and was initially defined by taking styling cues from Melbourne- and Hobart-based Sabdes' iconic 145 metre Project X.

Scott Blee of Sabdes says, “The new design proved to be a successful exercise in downscaling some signature styling elements from their much larger Yacht design to create a new design in what is a popular size of superyacht.”

True to her name, the overall form of the superyacht boasts a smoothness that marks her out as distinctive, and she features a series of interesting design details, including integrated drop-down balconies on both sides that don't disrupt the profile lines when they are up.

Meanwhile, a section of the superstructure above the main deck is painted with Mica paint, allowing the colour to change when viewed from different angles. This, and the sweeping structure leading aft from the foredeck, creates the effect of lowering the height of the trideck superyacht. The flybridge has a polycarbonate wrap-around screen and the Portuguese bridge doubles as a wavebreaker in extreme conditions.

Sabdes is also pressing ahead with other new designs in the 38 metre to 45 metre range.