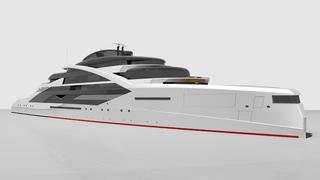 ‘I knew there was a market for this size of yacht, but I didn’t just want to design more of what’s already out there,’ says Sabdes designer Scott Blee. ‘I wanted to create really smooth surfaces, no fussy details, a lean design that if you didn’t see it against something, you couldn’t tell the scale – like (Philippe) Starck did with A.’

The profile of the 145m design ‘X’ is sleek, with minimal detailing that helps disguise the scale of the yacht. The concept’s muscular, rounded surfaces give it a strong, warship-like look (unsurprising given Blee’s background in naval ship design for companies such as BAE Systems and Surface Ships).

Blee left the layout to be tailored to the desires of a yard or owner, but has suggested configurations. One version has a float-in dock for a 20m boat, twin helicopter landing pads and a hangar. Another replaces the dock with a beach club and a 20m indoor pool, with glass sections built into the sloping transom above. The design also offers a range of bow and engineering options. X has already received interest from a broker and talks have also begun with a prominent European builder looking at customising the design to its technical preferences.