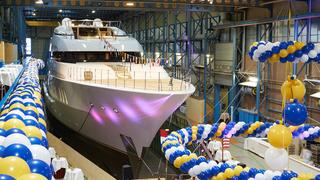 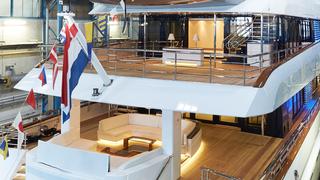 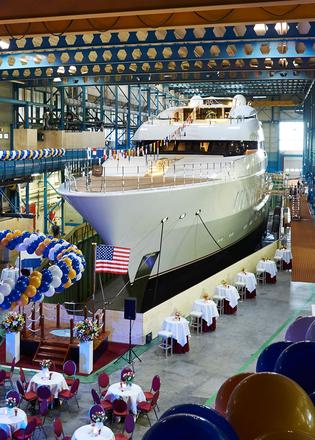 Feadship has delivered 66.25 metre superyacht Vanish. The delivery comes a couple of months after she was spotted sailing under her own power for the first time, which you can see in the video below.

The renowned Dutch yacht builder teamed up with Eidsgaard Design on the steel and aluminium yacht, which was re-sold last year during her construction.

As you can see in the video, the stepped design of the transom really stands out. Vanish's owners didn’t want to feel intimidated by the size of her when arriving by tender or swimming off the back – so the designers created a transom that slopes gently up from the swim platform to the aft deck.

Another notable feature is the large free-standing staircase that is flanked by a glass wall in the full-height atrium. The yacht also features two touch and go helipads and an outdoor cinema.

On the main deck, the full beam owner’s suite includes his and her bathrooms, a separate lounge and a unique balcony, that extends out from under the starboard companionway to sit flush with the floor level.

There is also a large VIP suite on the main deck, which can be converted into two separate cabins if required. Four additional guest suites can be found on the lower deck, while the crew area can accommodate 17 crew.

“This launch party encapsulates the energy with which the owners have embarked on fashioning their Feadship,” explained Feadship director Jan-Bart Verkuyl.

“They are excited about enjoying all the options involved in being close to the water, from the exquisite transom sea terrace to the inviting sun deck bar.

"Vanish has been designed to suit the way they like to spend time onboard with a wide array of watersports options. With helipads on both the sun deck aft and bow area, she serves as a springboard to a world of adventures for the owners and their guests.”

Feadship had several notable launches in 2015, including its largest ever yacht, the 101.5 metre Symphony. The Dutch yard has several other projects on the go, one of which is the 96 metre project 1006, which is due for delivery in 2017.