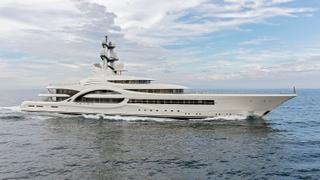 The 110 metre Feadship flagship Anna has returned to the Netherlands-based yard for a series of maintenance works in preparation for the summer season.

Launched last summer, the four-deck displacement yacht spent her maiden season in the Caribbean before returning to her home yard.

She will now undergo a series of “minor works” before heading off on her first summer season of cruising.

Director of refit and services at Feadship, Pier Posthuma de Boer, said the owner was taking advantage of the My Feadship programme launched last November.

“It is self-evident that the best place to have a refit or rebuild carried out is by Feadship or one of our four partner yards within the Feadship Services Network,” he said.

“We are pleased to see that an increasing number of Feadships are also benefiting from the added value of having us take care of maintenance work as well.”

Built to Lloyd’s Registry standards, the steel and aluminium built yacht features a dramatic architectural curve that links the main deck with the upper deck, and a striking mast arrangement.