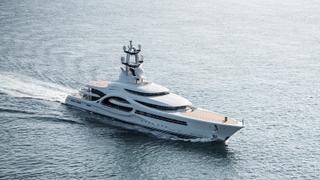 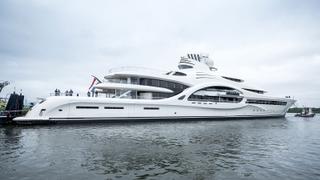 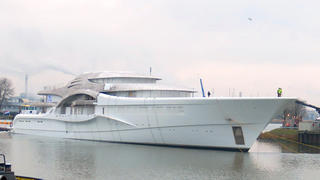 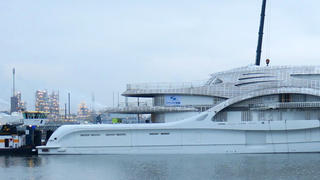 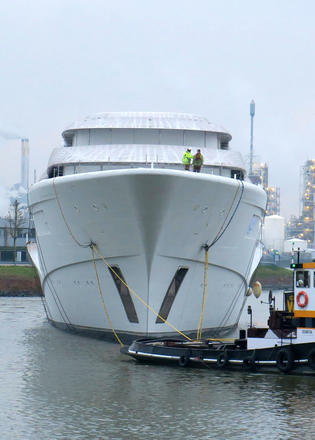 The largest Feadship superyacht to date, Anna, has embarked on her first day of sea trials. The superyacht was pictured leaving the port of Den Helder in the Netherlands on July 24 and will complete rigorous sea trials in the North Sea.

It comes after the superyacht was launched earlier this month at the yard's Makkum facility. She was moved through the centre of Amsterdam and had final steering and propulsion gear fitted ahead of her sea trials. Once delivered she will join Jubilee as the joint largest yacht ever built in the Netherlands.

Styled inside by Michael Leach Design in collaboration with the owner's personal New York decorator Brian McCarthy Inc., the 110 metre Anna features in-house naval architecture by De Voogt. She was first spotted outside its shed at Feadship's Papendrecht sub-contractor Scheepswerf Slob in December 2016 after which the hull and superstructure were moved to Makkum for fit-out ahead of a planned 2018 delivery.

This four-deck displacement yacht is being built to Lloyd’s Registry standards and features a dramatic architectural curve that links the main deck with the upper deck. Hatches in the topsides hint at a side-loading tender garage and a fold-out superyacht beach club, although those features are yet to be confirmed by the yard.

The collaboration with Michael Leach Design is significant as the UK-based studio has previously worked on the iconic 96 metre Blohm + Voss superyacht Palladium and one other Feadship yacht, the 67 metre Anna.

When completed, Anna will rank among the world’s largest superyachts and will steal the title of Feadship flagship from the 101.5 metre Symphony, which was launched in 2015.

Other recent notable projects from the Dutch yard include the 73 metre Hasna, which was delivered in 2017 and was a winner at the World Superyacht Awards 2018, and the 69.5 metre Samaya, also delivered in 2017. Looking further forward, the yard is also believed to be developing a 93 metre yacht called Project 814, with a 2019 delivery planned.