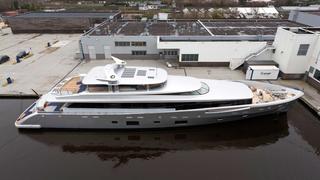 Crichton, a car importer and racing car driver, has built a number of competitive sailing yachts in his native New Zealand, but felt the time had come for a custom motor yacht.

‘Once the decision to work with Feadship for the first time was made, I followed the construction process closely at all stages,’ comments Crichton. ‘I am pleased to be able to report that Feadship has exceeded my expectations – in particular the quality and finish of their workmanship – in all areas and working with them both professionally and personally has been an enjoyable experience, with a remarkable and unique superyacht as the end result.’

Crichton’s history as a car importer and racing car driver have influenced aspects of Dubois Naval Architects’ exterior design for the semi-displacement yacht, including a tumblehome in the superstructure and a sleek, racing car-style cockpit. Even the yacht’s two and a half decks – a departure from Feadship’s recent four and five deck offerings – adds to an automotive sleekness.

Como’s other striking design cues include features a ‘whaleback sheer’ that curves up towards the bow and the largest hull windows the yard has ever produced. The glass for windows in the superstructure has been laid on top of the metal to create a continuous, modern look. Up top the sun deck offers a spectacular outdoor space for parties.

'We are delighted to make our mark once again in this size range,' comments Feadship director Henk de Vries. 'Feadship is not only about very large superyachts: we also pride ourselves on creating exceptionally well-honed objects on a more human scale. We have used the very latest technologies and developments to push the window – and the windows – on what is surely the most sophisticated 46m superyacht in the world today.'

Eight guests can be accommodated in two double and two twin cabins, while eight crew members will sleep in four cabins. The interior design by Redman Whiteley Dixon features lots of dark timbers and much detailed craftsmanship. Como is powered by two Caterpillar C32 engines offering 1417kW at 2300rpm, but speeds and range have not yet been revealed.