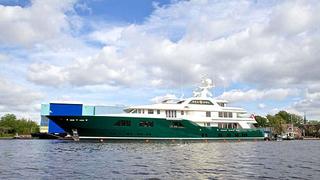 While her official launch isn't due until July, the technical launch of Feadship's hull No. 807 gave a sneak peak at the 62m superyacht dubbed Sea Owl.

She features exterior styling and interior design by London-based Andrew Winch Designs, who also designed the owner's previous yacht, the 43m Sea Owl built by Burger. Like the owner's previous yachts, she features a green hull, which Feadship is calling 'jade-mist green', and an off-white superstructure. Her exterior is detailed in varnished teak wood and stainless steel.

Adding to the designer's earlier comments on the launch, the client's representative, Anthony Sands of Edge Yachts, says, 'We believe she is quite possibly the most-customized sixty-two-metre yacht ever built.'

Feadship states that Sea Owl has arguably the most custom custom interior ever seen on one of its yachts. The highly bespoke interior contains fantastically detailed hand-carved sculptures, petrified woods and marbles. Her design also called for highly technical specifications, including an elaborate security system.

As the yacht is designed to suit the family-oriented owner, Sea Owl also boasts myriad games, toys and themed areas for younger guests. There are two dedicated children's cabins on board sleeping four children and a nanny cabin. Further accommodations include the owner's stateroom and three guest suites. Eighteen crew are accommodated in eight twin-size cabins, plus a captain's cabin and a chief engineer's cabin.

Sea Owl is now undergoing extensive sea trials to prepare for her official launch. Stay tuned for more details on this exquisite yacht.