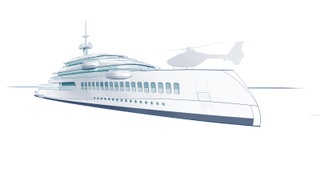 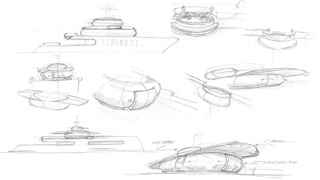 Dutch yard Feadship has revealed a new 65 metre concept called Silence, which was a result of the yard's biennial Captain’s summit.

The superyacht, which would be built from a steel hull and aluminium superstructure, was designed with a female American client in mind, specifically to “facilitate partying by day, becoming zen by day.”

Key exterior features include a hanging pool aft, which is supported by a central glass structural pillar. Below this sits a stage for dancing and sunbathing, accompanied by a spacious beach club. Other key features include a Hydroponic garden, crow’s nest and touch and go helipad forward.

The design's tender lift platform system would allow passengers to board the tender while it is still on the platform, lowering them down into the water safely without the need of a crane.

Inside, the design features a spa, main deck bar and underwater lounge. Silence is also equipped with an ocean clean-up system, which would be deployed during crossings to remove plastic from the sea. Special stores sit beneath the lower deck to store the plastic until it can be disposed of at shore.

Accommodation would be for a total of 12 guests. The master cabin would sit on the private owner’s deck equipped with a private spa pool. The remaining guest accommodation sits on the lower deck comprising four double guest staterooms and one full beam VIP. The crew quarters meanwhile would allow for a staff of 18.

Other key numbers include a beam of 12 metres and max speed of 16 knots. Silence would have a range of 5,000 nautical miles at 12 knots, with a 14 knot cruising speed.