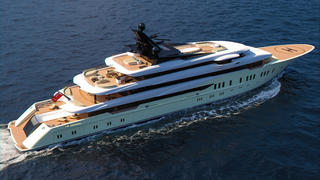 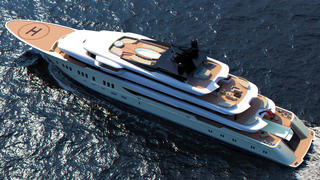 Atlas would be built from a steel hull and aluminium superstructure for a total internal volume of 3,000 GT. This is the follow-up to the Ferrari Franchi F60, which will be one of the top superyacht concepts going on display at Monaco Yacht Show 2016.

Ferrari Franchi describes Atlas as “a modern and elegant yacht” with extensive outside areas for entertaining, including a superyacht helipad on the foredeck and a 6.5 metre long infinity pool back aft.

Inside, the layout includes a main deck saloon, with direct views out from the separate lounging and dining areas. Accommodation is for 14 guests and a crew of up to 26, including four en-suite VIP cabins below decks.

On the owner’s deck, the master suite features 180-degree views, a private Jacuzzi, his and hers en-suites, a private office and direct access to the foredeck.

The garage includes enough room to store a pair of 10 metre limousine tenders, a five metre dayboat, four Jet Skis and a personal submersible, while a 6.5 metre RIB can be stored in a separate enclosure below the helipad.

On the bridge deck, Atlas features an enclosed wheelhouse ahead of an upper deck saloon, while on the sundeck there is a second swimming pool (measuring seven metres long) and another Jacuzzi.

Ferrari Franchi has not released any engine installation plans, however, Atlas has been designed to cruise at a maximum speed of 18 knots.