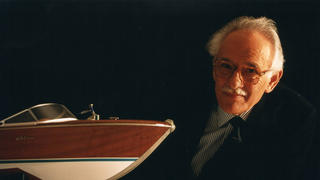 One of the yachting industry’s most renowned entrepreneurs, Carlo Riva died peacefully today (April 10) in his hometown of Sarnico.

Alberto Galassi, chief executive officer at parent company Ferretti Group, led the tributes, saying: “The world has lost a brilliant creator of boats, a master of style, [and] a giant in Italy’s industrial and business history.”

Born in Sarnico on February 24, 1922, Carlo Riva built his first boat at the age of 17 and ten years later he followed in the footsteps of his father Serafino, his grandfather Ernesto and his great-grandfather Pietro by taking over the family business. The newest member of the Riva dynasty went on to lead an already successful company into an unprecedented golden era.

One of the earliest examples of a Carlo Riva-era speedboat was the Riva Ariston. He described it as “strong and pure, like a thoroughbred horse”.

Legendary models such as the Riva Florida, the Riva Tritone and the Riva Sebino were also launched under his tenure, culminating with the 1962 Milan International Boat Show debut of the Riva Aquarama, which has come be to considered as one of the true icons of yachting, synonymous with the elegance and glamour of its celebrity owners such as Brigette Bardot, Sophia Loren and Peter Sellers.

Always an innovator, Carlo spearheaded the construction of the first fibreglass boat in 1969 before leaving the company in 1975.

Now part of the Ferretti Group, the Riva brand has grown to encompass everything from the sporty 8 metre Riva Iseo tender to 50 metre steel and aluminium superyachts.

His values and ideas still influence the company today, as Galassi added: “Carlo Riva’s boats will always be a source of inspiration to all of us who feel a strong sense of responsibility for taking this leading brand forward into the future. Farewell Mr Riva, and enjoy the sea in your last voyage towards the horizon.”