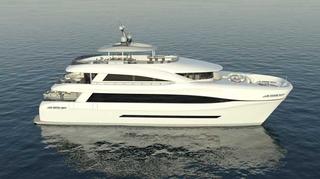 The hull of the largest carbon hybrid composite power catamaran in the world has been built at Logos Marine in Turkey, where production continues in full swing with a view to delivering the yacht in November 2012. The quaranta, as it is called, is a flagship vessel - the first to be built after four years of development by Curvelle, the company set up by Luuk van Zanten to design and build power catamarans, which he believes 'will change cruising forever'.

'We are not reinventing the wheel,' says van Zanten. 'We have taken well proven concepts and applied these to our design. The difference is that they have not previously been seen combined in one single yacht.'

For a start there is the very sound, albeit workhorse ferry catamaran platform. It is a hull form that specialist catamaran naval architect Incat Crowther has perfected, having over 300 designs launched and in service, and it has the advantage of having been tried and tested for fuel efficiency, performance and comfort ratios.

'Catamarans are more efficient and more stable,' says van Zanten. 'They are a lot more comfortable on the water and unbeatable when it comes to performance, range and fuel economy.' In the quaranta's efficient hull form this translates to a comfortable cruising speed of 22 knots, and a 30 per cent reduction in fuel consumption at speeds over 20 knots.

What is unusual is that the hull configuration is also suitable for non-planing speeds and at an economical speed of 10 knots quaranta has a transatlantic range. This makes the cruising speed spectrum and cruising experience a lot more versatile.

However, for Curvelle, the challenge lay in making the efficient catamaran ferry platform into a beautiful-looking yacht. To this end the Curvelle team – which apart from Incat Crowther, includes London-based designers Lila-Lou, responsible for both interior and exterior design – embarked on a four-year development programme which entailed tank- and computer-testing the platform, designing three different versions, producing over 350 3D renderings and building 15 scale models.

Then there is the space and flexibility that a catamaran affords - with a 9 metre beam and the stability provided by two hulls, the 33.7 metre semi displacement yacht not only has four decks, but also the equivalent guest space of a 40 metre monohull. Indeed, this is the inspiration for the yacht's name quaranta - forty in Italian, and also a nod to the yacht's Italian exterior stylist Mauro Giamboi of Lila-Lou (and formerly Bannenberg).

Total flexibility is key to the quaranta's layout, which includes six generously sized double cabins that can be reconfigured into three VIPs, six twins or any combination of these. There are, in fact, a choice of over 20 different layouts on this yacht, and the crew can change the configuration with only a few hour's notice. Such flexible guest accommodation is an idea taken from the hotel industry but adapted and improved for the quaranta. Although it is certainly not unusual for superyachts to have cabins that can be reconfigured into suites, it is quite unique for every cabin to be adaptable.

All cabins are on the main deck, which means they have the benefit of huge windows - 2.5m in length and nearly a metre in height. During the day, the guest cabins can become mini saloons, giving guests the choice of spending time in their cabins during the day if they don't wish to socialise in the main guest areas.

The guest areas include a large saloon on the main deck with views from a higher level than on a monohull – and thus more privacy when in port – and an indoor/outdoor dining area for up to 12 guests with opening glass partitions. The interior style is modern Italian – pared back elegance with a touch of luxury.

Deck spaces on board the quaranta are also very versatile with a large sun deck featuring a 12-seater al fresco dining table, a fully equipped bar, dumb waiter for bringing meals up and of course sunloungers, sun pads and a spa pool. There are additional sunlounging and dining areas on the main fore deck.

The large main deck aft is dual-purpose: a working/toy and tender storage deck when under way and a guest deck when in port and the tender is berthed in the tunnel between the hulls. Its hydraulic lifting platform allows guests to step straight on to the limousine tender on board and be lowered into the water or vice versa. When the platform is lowered it can be used as a beach deck for guests.

The yacht is being built from a carbon fibre hybrid material (carbon fibre woven together with e-glass) laminated on an Airex PVC core and bonded with epoxy as a composite. Although expensive, these materials have the long term cost benefits of lower weight, lower maintenance, higher durability and longevity. The lighter weight also means smaller engines are required to propel the vessel, and although a catamaran requires two engine rooms - one in each hull - this adds to redundancy, should anything happen to one of the hulls.

Despite the cost of building a catamaran with its two hulls and two engine rooms, Curvelle has worked hard to obtain optimum cost-quality-benefit rations, and the first quaranta will be on sale for a surprisingly low introductory price of €9.68 million, which is about half the cost of a performance monohull with similar guest areas.

Curvelle is also proposing a fractional ownership programme, which broadens the market for the quaranta considerably.